I was trolling Youtube for interview snippets with Joan Crawford and two things occurred to me-- one, I live in a blessed age where I can pull up an interview JC did planeside at some Pepsi Cola event in Africa in 1955 whenever the mood suits me, and this is really a great thing for the nitty little celebro-phile like me; two, isn't it interesting to think about the clothes that celebrities chose for themselves to wear in personal and public appearances in the age *before* the celebrity stylist? I'm sure Joan Crawford had lots of guidance from personal style friends like MGM costume designer Adrian and interior decorator William Haines, but a lot of these clothing choices probably came from making bad decisions in her youth and refining those choices, over years of being a celebrity, into "what Joan Crawford should look like". I remember reading in one of the millions of biographies out there that JC always bought an extra bolt of matching fabric with her dresses to have shoes made to match, and this seemed to fifteen year old me to be the very HEIGHT of chic. I know matchy-matchy is frowned upon nowadays, but really! Exact patterned shoes in the exact pattern of your patterened dress? Sounds like heaven to me.

What you can find out there on the web is kind of hit and miss, with regard to interview segments and my idol, but it's definitely worth checking out. Here are some of my favorite clips, for better or worse: 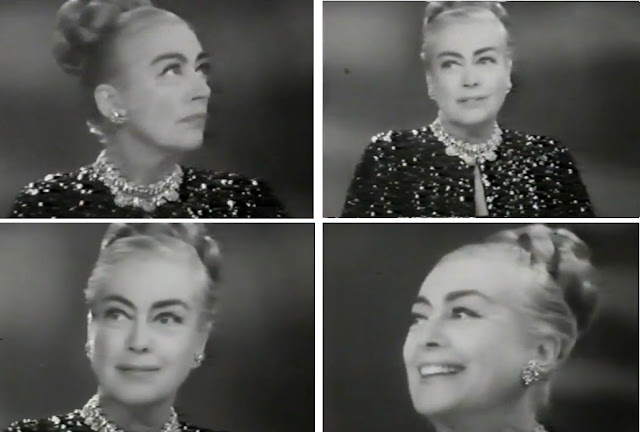 This is from an interview by the BBC in 1966...I love that they would just do lengthy interviews of celebrities, up close, without all the bother of the daytime talkshow or game show format that ruins a lot of classical Hollywood tv appearances for me. I'm always surprised, given her spitfire, cute, "modern girl" persona of the thirties', and her strong, dramatic (sometimes to the point of histrionics) "women's picture" roles in the forties' and fifties', to see a soft spoken, extremely careful-with-her-diction Joan Crawford politely answering the interviewer's questions with those still-flashing eyes, almost as if she were on a quiz show ("Did I get it right?"). Let's look at her overall appearance though--  her hair is atypically blonde, eyebrows classic late Crawford thick, but not quite crazy (sometimes, I just have to throw my hands up at her eyebrow pencil choices)...she has on a full sequined black beaded jacket and a glittering necklace and earring set. I! Would! Wear! This! Right! Now! I have such a problem with vintage evening wear sequins, especially in black...it just screams "movie star" to me. 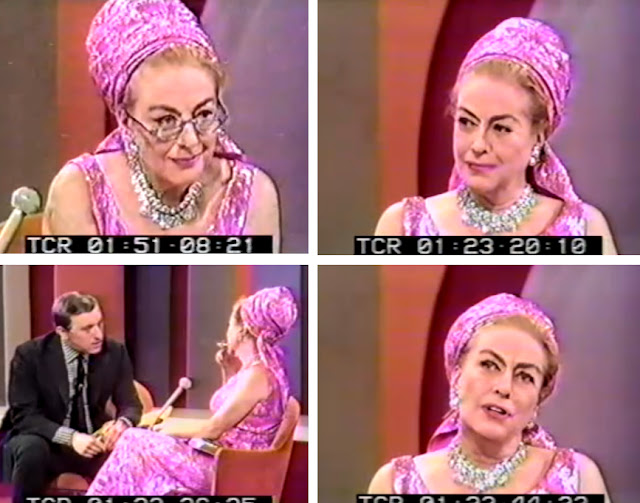 British people lo-o-o-ve Joan, apparently (who doesn't), and David Frost is the kind of British Dick Cavett for his sixties' interview. It's difficult to get through, and not just for the pink brocade full length dress, matching turban, and collar of costume jewels (I secretly love this Joan as matronly Malibu Barbie look). Poor JC is not nonsensically drunk, but that kind of drunk you get when you're drunk enough to have lost the inhibition to call someone you probably shouldn't call, but upon reaching them, somehow want to convince them that you haven't been drinking. OH, the times I have been in those sad little shoes (and probably will be again!). It's very "Well....you know....David...what I have thought about...what you're asking....in terms...again, in terms of...what is truth...". If you took a verbal flour sifter and put this full-length interview through it, there would be very little usable grains of knowledge amongst the chaff (and by "chaff", I mean vodka-fueled tangents that don't lead anywhere). Does she talk about the size of Gable's penis? I think she does (she keeps getting bleeped out! I told you! She's blotto!), but she also talks about a scene where he had to slap her and said he got so upset about having to "really do it" for the camera that his hands were shaking before hand and he actually apologized after. One thing I would really love to know all about, and probably never will, is the working and personal relationship of Crawford and Gable, who were romantically involved during a lot of the movies they made together, and off and on for almost twenty years. The only thing better than Lombard and Gable would be Lombard and Gable not tragically cut short, and the only thing better than  Lombard and Gable not tragically cut short would be Crawford and Gable. What a husband, compared to some of her clunkers! But I digress. There's a weeeeeird segment talking about the artistic ranch the director of the episode of The Virginian tv show (not exactly Citizen Kane, but you'd think so from the way he describes it), but still, overall, worth watching to 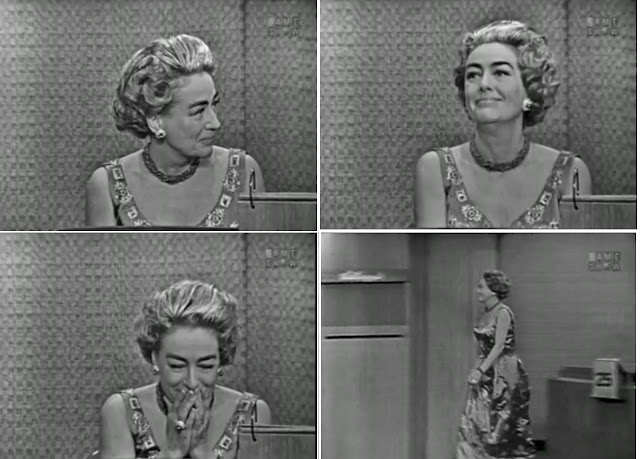 Well, I was all excited to show you this ONE appearance Joan Crawford did on the classic television game show, "What's My Line"...whereafter I consulted the indispensible Joan Crawford online resource The Best of Everything and found out she's been on the show no less than FIVE TIMES between 1957 and 1963. If I were Dorothy Kilgallen or Bennett Cerf and I couldn't figure out who the person was, I think I'd just automatically guess "Joan Crawford". She goes back and forth throughout her appearances between a shy, Southern drawl for a disguise, or a weird high pitched voice, or in one case, an Italian accent. Let it never be said that I don't L-O-V-E the premise of this show (trying to disguise a famous person's identity to blindfolded panelist through wacky voices). Also, the clothes in these segments ARE OUTRAGEOUS. LY COOL. The dress above, for example, looks like a regular fancy cocktail dress. I was thinking that when she got up from the podium to thank the panelists I would be seeing a nipped waist, frouffed out skirt. But no ma'am! Joan keeps it regent with a floor length ballgown. Atta girl. Look at her other choices (and if you think her hair was weird in that picture above, these are weirder): 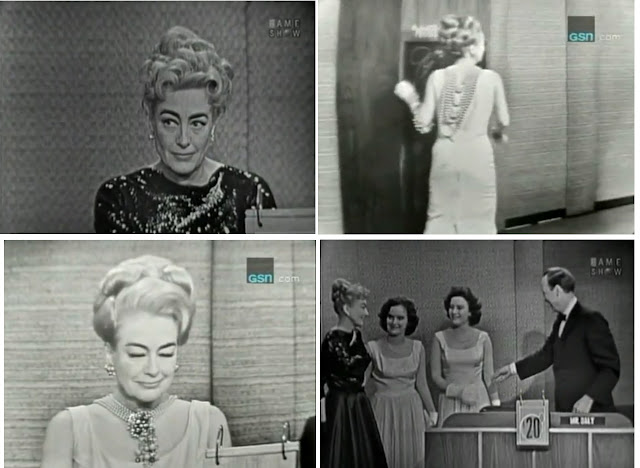 The dress with the pearls down the back, which culminate in a cluster of pearls and jewels at the front, in the lighter colored panels may be my favorite dress ever. Add ballroom length gloves and a huge bracelet and earrings, and again, you have star power. The last panel shows her with her twins, Cathy and Cindy (alias, the kids that DIDN'T support Mommie Dearest's publication, and maintain their mother's innocence to the claims in that and subsequent books). Also, this. Just this: 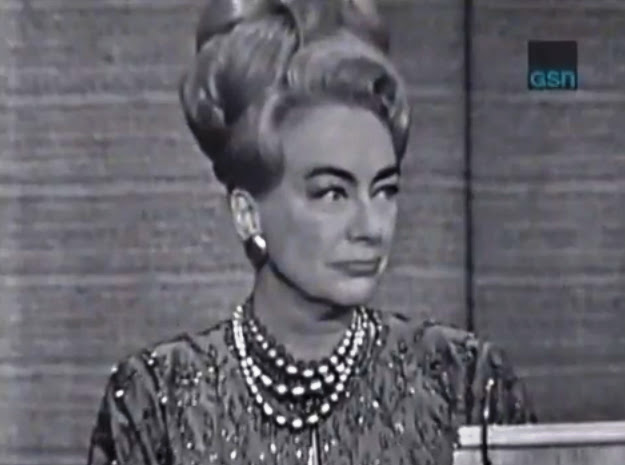 What do you think of JC's over the top star style? Is it too desperate or just fabulous enough for someone of her celebrity? Which interview/appearance do you like the most? Which wig should I choose for my own Hollywood hairstyle?

Sorry this is so late! I'll see you guys bright and early tomorrow.
Posted by Lisa at 2:10 PM