I think I remember seeing this photo before in the coffee-table compilation book Life: In the Sixties. At the time, I figured the two young women were simply denizens of swinging London, hanging out on a balcony and strutting the peacock fashions for which the decade would eventually become known. I DID NOT know that the women pictured are Mia Fonssagrives and Vicky Tiel, the rooftop is not in London but in Paris, and the apartment to which the tiny balcon is attached houses the fashion label Mia + Vicky, one of a handful of designer labels who lay claim to the invention of the mini skirt.

Get it, Mia and Vicky! Let's take a look at the day to day doings of wildly successful fashion designers, in the sixties', both in their early twenties. Could you just die for this lifestyle?

Here, the designers take advantage of their apartment building's roof to think over sketches-in-the-rough. While I adore Vicky's garden print sundress, green strappy sandals, and chic bouffant, I'm not sure what's going on with Mia's ensemble. I think her shoes match her tights match her top, with only a strangely fitting pair of white culottes to break up the color line. What are your thoughts? She looks kind of like a beautiful op-art leopard... in culottes...

The girls' shop, which opened slightly after this article ran and financially backed by Elizabeth Taylor (we'll get to that), was one of the first to offer the wildly patterned tights that became a staple of dolly birds both on the Continent and back in the states. Vicky describes using left-over lace from a shift dress to whip up a matching pair of heavily textured, totally new hosiery, in time to go to a party that night. There are times, especially when confronted with a social engagement in an hour and closetful of clothes I don't feel like wearing, I really wish I were a seamstress...

Above, Mia lets loose at a Paris nightclub (Castel's) with Vicky's back to the camera, and Mia dyes a swath of fabric in the bathtub of their apartment while Vicky stands in the bathtub behind the material. I have to cite my partiality to Vicky Tiel from reading her book as possibly coloring my perception of the article's photos, but does it look to you like VT is kind of running second banana to MF in this article? Maybe the photographer was more interested in Mia because of her Françoise Hardy like figure and famous family (Mia's mother, Lisa Fonssagrives, was Irving Penn's favorite model and divorced Mia's father to marry the photographer. Drama!). Me, biased by my great love of her memoir (we'll get to that, too), I keep squinting to see if I can get a better look at Vicky!

HERE we are. These two photos appear in the article under the heading: "THEY WORK HARD-- AND ARE SWINGERS". Mia's dress in the photo at left, inspite of looking rather innocuous, is actually, according to the caption, culottes (again?) and Vicky's dress is trimmed in leather at the collar and cuffs (she was once called to the director's office and given a harsh talking to during her time at Parson's for showing up to class in an all leather, mini-skirted item she'd made herself, copies of which she sold out of her apartment and the proceeds of which paid her rent).

At right, the girls attend the premiere of Goldfinger, and profess a desire to dress the Bond ladies in future films (which would come partially true, as the girls did costumes for Woody Allen's first film, What's New, Pussycat, and dressed Honor Blackman, whose sultry, poster-stare you can just make out behind Vicky's head in the photo). VICKY is the perpetrator in this photo, as I am informed by the caption that her ensemble is "a dress-up pajama suit". Meaning the bottom of the outfit is...pants. What do you girls have against plain, honest skirts?! Still, they do look sixties' chic to beat the band.

I didn't realize embellished bra-tops or bare midriffs were an acceptable evening wear choice in the sixties (they seem to seventies' to me), but Vicky and Mia were trailblazers! And why not. Here are some sketches made for both a ready-to-wear line they were working on in 1965 for Sears Roebuck and for Honor Blackman's costume at a particularly tragic portion of the film, printed under the heading "Sketches for Sears and a Suicide" (sounds like a indie rock album title if I've ever heard one):

I love the feather fringe/black tights/backless number at bottom right. I can't help myself.

A model-esque shot I found on ebay (there's another good one of the girls at their drawing desk, but it was really watermarked, and I felt guilty about reproducing it here without permission):

While doing costumes for the aforementioned movie, Vicky met Ron Berkeley, a well-known makeup (and ladies') man, whose principal charges were, oh, just.... ELIZABETH TAYLOR AND RICHARD BURTON (I'm not impressed... no, actually, I am very impressed, and am lying about not being impressed. Emphasis on those capital letters!). I couldn't find any good pictures of him online, but imagine he looks just like 70's era Franco Nero. Which is one of the highest compliments I can pay a man (like this, the same cool blue eyes, wide cheekbones, and blond hair but with less muttonchops). At any rate, Vicky embarked on a serious love affair with him which led her to traipsing around the globe on the Burtons' yacht, the Kalizma, and having good times across the world on different movie shoots (including the camp classic Boom!, which I still kind of love for the costumes and the Burtons in spite of its short comings as a picture). Mia married Louis Féraud, one of the fashion designers who helped them get their start in Paris in the early sixties', then divorced him, gave up fashion for sculpting, and moved back to the US, forever changing the "Mia + Vicky" label to just "Vicky Tiel". The Vicky Tiel label would go on to create the "Torrid" dress, which is, oh, just the red dress Julia Roberts wears in the Cinderella'y-est part of Pretty Woman (I am once again making my best effort to appear not impressed, yet am).

Want to be as crazy about VT as I am? Maybe you should read her book!

I ordered this from another library and let it languish on my desk for three weeks, then renewed it, then, out of boredom one day, cracked it open. AND DID NOT PUT IT DOWN UNTIL I'D FINISHED. You really will like it. My only regret is that I didn't read it in the first three weeks. I didn't know! 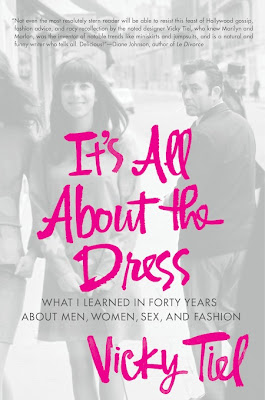 Anyway, hope you enjoyed hearing me blabber about sixties' fashion for a whole post. What do you think of the Mia and Vicky designs? Do any of you mid century modernites, like me, ever branch out to a wilder side of sixties' style? Do tell!

You can get your very own (!!) Butterick pattern of a Mia + Vicky swinging 60's design here and here on Etsy.


PS: A father's (slightly hilarious, completely wrongheaded) response to the Mia and Vicky's Life article, from the next week's issue (can you hear your own dad's voice in this?):