Undercurrent was part of a multi-disc set of Katharine Hepburn movies I bought circa 2007, back when I was a single gal working in a fully grown up job with hardly any bills and I used to trawl half.com for good eBay deals on classic box sets (bid time return, lol). It's hard for me to remember back to a time when I was actively collecting dvds, but there you go-- fossil record evidence of the pre-streaming days. I remember having liked the movie more than I thought I would back then, but ten years later, in the throes of this Robert Taylor kick I'm on, I thought I'd give it another spin. And oh, what a spin it was. 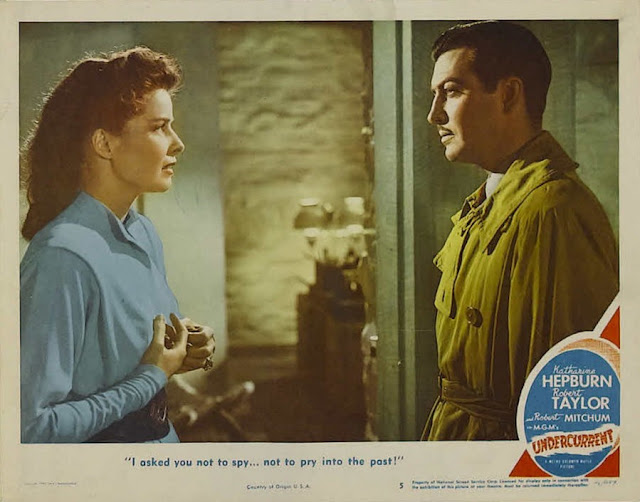 The movie follows scientist's daughter Katharine Hepburn, at first glance messy in slacks and a shapeless shirt, who falls for dashing industrial millionaire Robert Taylor when he comes to discuss some mineral's commercial possibilities in government contracts with her father. Taylor pitches woo, Hepburn unstupidly marries him, and they fly off back to his home-base of Washington, DC to start their happily ever after. However, the introductory cocktail party thrown in honor of the happy couple is a nightmare for Hepburn as she is dowdily dressed among the swans of political high society and out of the loop for all the Congressional shop talk, and things only go downhill from there. Everyone keeps mentioning "Michael, Michael, Michael" as they congratulate the newlyweds-- where's Michael? Has anyone seen Michael? What about Michael? The young man is revealed to be Taylor's brother, a presence that hangs spectre-like over the onscreen proceedings. Did Taylor have something to do with his disappearance...or dare we say it, possible MURDER? What connection does the sultry, sleepy-eyed caretaker (played by OH HELLO ROBERT MITCHUM I FORGOT YOU WERE IN THIS) at Michael's ultra modern cliffside hideaway have to the mystery? Why does an increasingly more agitated Robert Taylor react so violently to the mere mention of the brother's name? 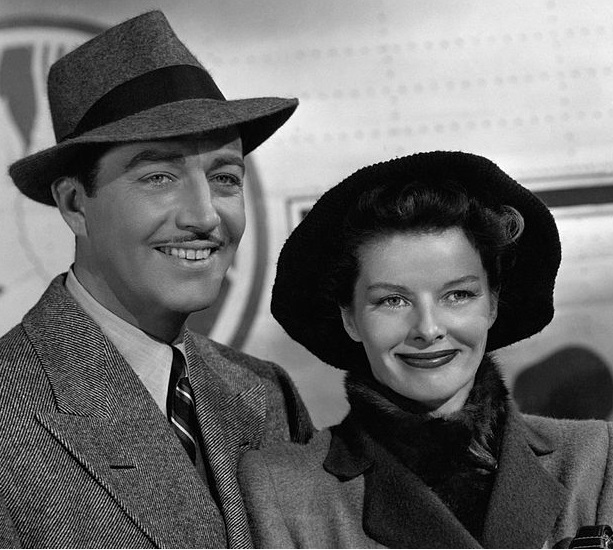 While I was deeply invested in the midcentury women's magazine story going on here (which, indeed, was adapted from a story by Thelma Strabel that was serialized in Woman's Home Companion magazine between 1944-5), Undercurrent is a bit of a mess. A beautiful, well meaning mess, but a mess just the same.

For one, the movie owes a substantial debt to Daphne du Maurier's Rebecca, which made a more successful transition to the screen only a few years earlier, and in that sense, also to Rebecca's spiritual predecessor, Jane Eyre. Both Rebecca and Undercurrent follow the plot impetus of an inexperienced woman who marries hastily and finds herself ill-at-ease in the soignée circles to which her new husband belongs-- each features a husband harboring some dark past that yet haunts the marriage by way of an unseen character is continually brought up to stir the mystery. In Rebecca, no less a luminary than the fresh-off-the-set-of-Gone With the Wind Vivien Leigh was turned down for the role of the timid second Mrs. de Winter in favor of a more believably maladroit Joan Fontaine. No such favors were done in the casting of Undercurrent. My GOODNESS could they have chosen a more ill-suited actress to fill the unsure shoes of the protagonist in this than Katharine Hepburn, who, in spite of her extraordinary acting chops, is by very definition brimming with brash self-confidence. 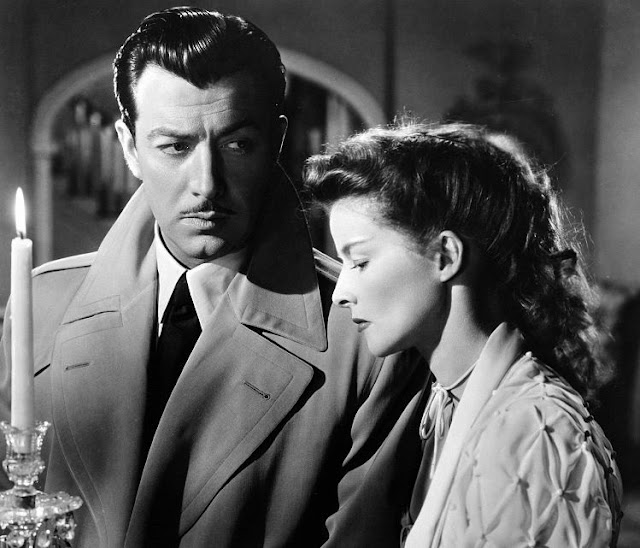 At a turning point in her career by 1946, Hepburn had already clocked two distinct phases in her onscreen persona. Her 1930's body of work, in which homegirl won not one, but TWO Best Actress Oscars, was defined by a dewy, vulnerable, unusual-but-lovely-in-her-way Hepburn, always playing an endearingly odd duckling, full of vigor and strident self-assurance but also secretly susceptible to showing real hurt in a way that would bring tears to the moviegoers eyes as they did to her own (see: Morning Glory, Alice Adams, Stage Door...as I just start crying thinking about them). In the 1940's, the ingenue gave way to the brassy society/career girl, who traded well-enunciated barbs with Jimmy Stewart and Cary Grant in The Philadelphia Story and tackled taming sportswriter Spencer Tracy in Woman of the Year. The brisk, assiduous spinster/semi-spinster roles she was to play in the latter half of her career (Summertime, Desk Set) were yet to come. And so why not, well-meaningly enough I'm sure, plop our Kate into one of the LEAST believable characterizations of her career (yes, I'm counting this as only third behind her role as an Ozark mountain hillbilly in Spitfire and her role as a native villager in rural China in Dragon Seed...because those really did happen somehow). Even 1930's Hepburn in this role would have been too headstrong to play Ann Garroway-- she's EVERY kind of wrong for this role, and yet somehow, I guess through the magic of consummate professionalism, she manages to make the best of things and comes off only just "wrong" and not "embarrassingly wrong".

There's a shift in her costuming after the disastrous dinner party when  the character begins to care about her appearance and suddenly her blade-of-grass-slim figure is hung with designer clothes instead of sloppy slacks and untucked blouses...some things go well on that front, and some not so well. I would like to mention in a special category though the ankle-strap wedgies she wears for a large portion of the movie, which should have got their own line in the credits. Ahem: 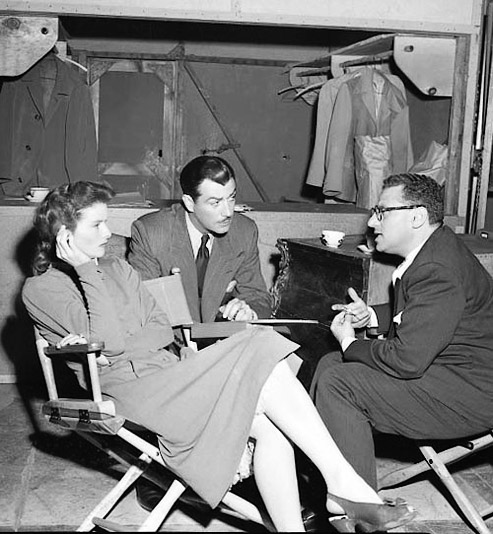 Robert Taylor, freshly returned to the screen from war service as a flying instructor in the U.S. Naval Air Corps, is very good excepting the occasions in which he is very bad-- he has a habit of darting his eyes around like some kind of cartoon villain to telegraph caginess, which...could be better than it is.  Nobody's perfect! However, it's a credit to his charisma and a fault with the casting in that you can't really dislike him in the way that's necessary for you to dislike him to make the part work. This is a Cary-Grant-in-Suspicion type husband role, where you should be charmed by him at the same time you're distrustful of him. Cary Grant had a kind of darkness to him, which made him a great Hitchcock leading man, and believable as someone who is only *pretending* to be as sans souci on the exterior while nursing some strange grudge, and Taylor just doesn’t have it in him to be as convincingly layered as the role demands.

My biggest gripe from the movie (SPOILERS AHEAD, stop reading if you haven't watched it yet) is the ending. There's a weird clash between the married Garroways about twenty minutes from the end that makes no sense, where Hepburn is suddenly afraid Taylor is going to kill her, and also inexplicably "in love" with Michael. I understand how this makes sense from a "ooh, wouldn't that be a fun way to end an already kind of histrionic movie" point of view but in terms of the development of the characters, what in the Sam Hill were they thinking?

What happens in the end of the movie: Robert Taylor either inadvertently or purposefully caused the death of the immigrant scientist upon whose work his company's fortune is founded, Robert Mitchum threatens to reveal him as a murderer/fraud, Taylor threatens to off Mitchum, Taylor and Hepburn argue, they go off on a horse trail together with their neighbor, Taylor schemes to get Hepburn alone and tries to force her horse off the cliff, Hepburn is thrown from the horse and the horse tramples Taylor to death. Mitchum comes to visit Hepburn in the family home where she's recuperating from her accident and there's a kind of understanding that they may get together sometime after the credits roll. Me, eyeballing the "the end" card like "WHAT. DO YOU MEAN."

What should have happened: Robert Taylor inadvertently caused the scientist's death but thought covering it up was better than being accused of murder and ruining the family name-- his weird neuroses come from being under the strain all these years. Mitchum threatens to reveal Taylor as a murderer, Hepburn continues to press Taylor about his brother, Taylor continues to act weird and lashes out at Hepburn. Taylor and Hepburn argue, they go off on a horse trail together and Taylor has some kind of complete mental breakdown because he's been kind of neurotic the entire time and now the added stress of Mitchum and Hepburn dips him over the edge. Time skip (calendar pages fly, fall turns to winter turns to spring, etc). Hepburn visits a sanitarium where she meets with a doctor in his office. The doc says Taylor's doing much better, but the delusions he's been suffering under will only improve if he has the love and support of his wife and family. Hepburn and Taylor have a scene in his room where he's in some very sharp pajamas in which he's obviously much better and contrite/vulnerable and Hepburn pledges to see him through this illness. She runs into Mitchum in the lobby who's coming to visit Taylor, they have a little mini-resolution scene, Hepburn has some great line referencing the "undercurrent" mentioned earlier when they first met, music swells, end credits. Me: "Ahhh. MUCH better."

Unfortunately, no one consults me in these matters. WHY. WHY. I'll have to go soak my head, I guess-- you guys check out all these contemporary-to-the-time press clippings, courtesy of the archives over at the Media History Project, while I do. 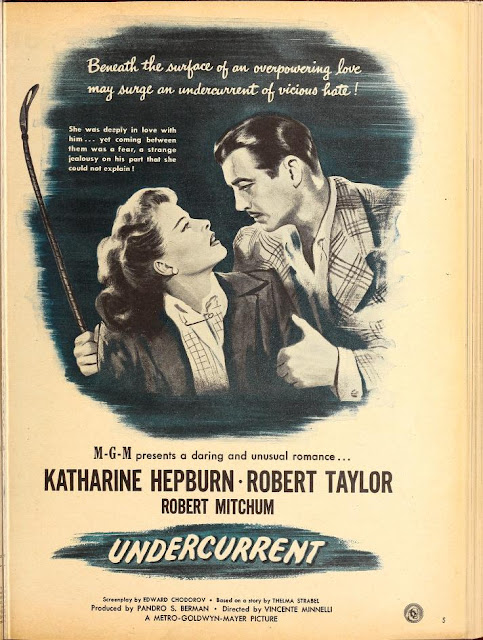 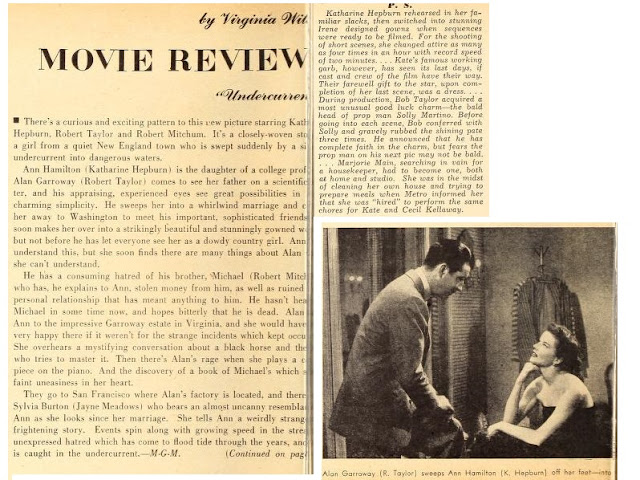 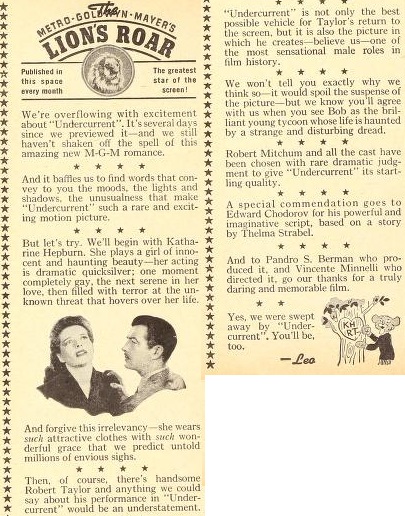 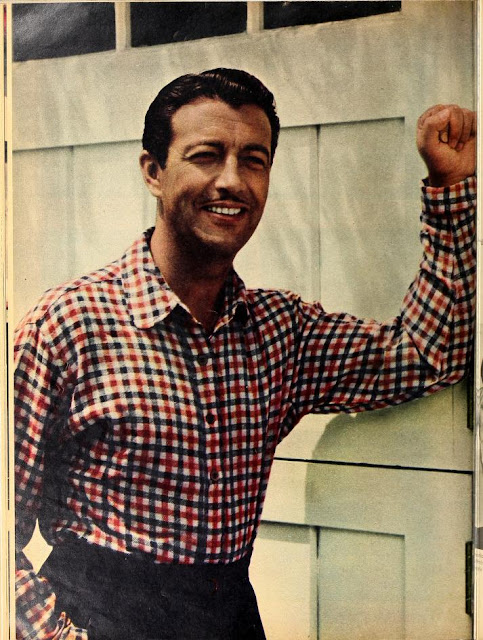 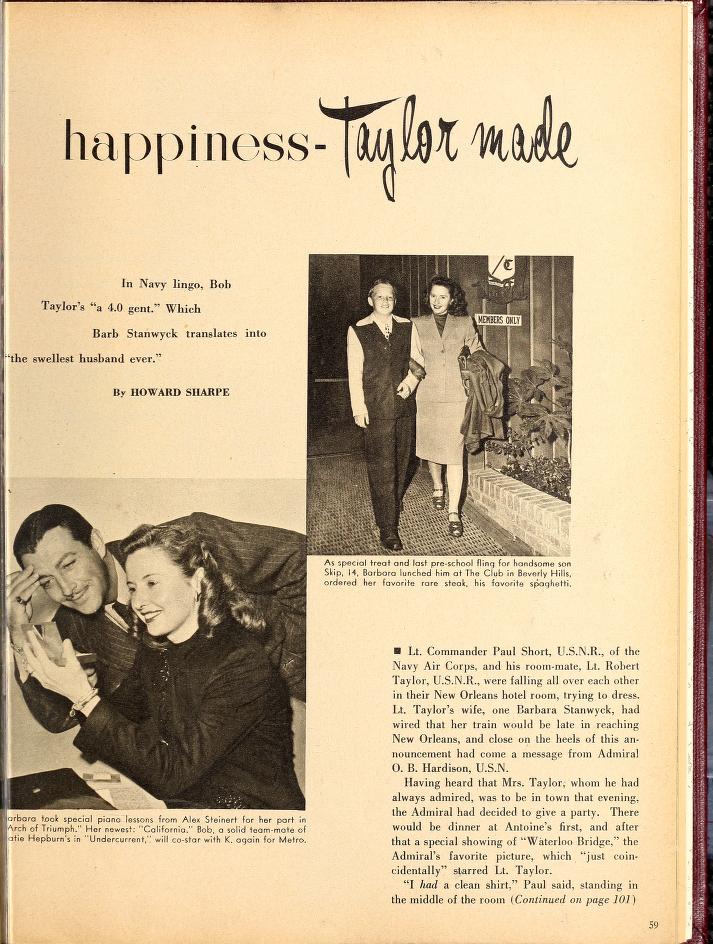 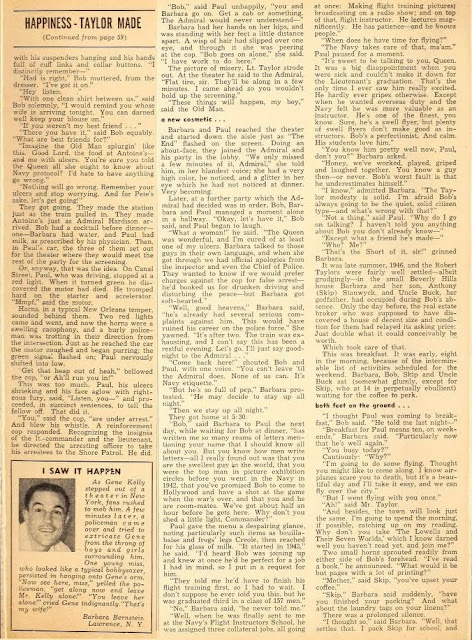 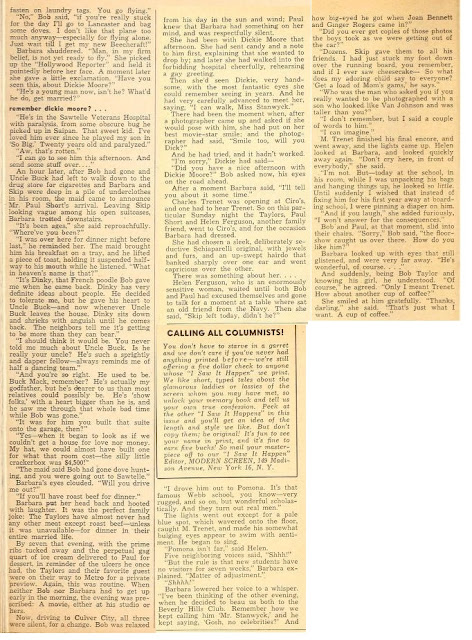 So! Seen any great, little-seen movies lately? Had a crush on an actor or actress that had flown under your radar previously? What's your take on Katharine Hepburn? Let's talk!!

That's all for today, but I'll see you again soon! Take care!
Posted by Lisa at 9:00 AM