Well, we made it to Friday, and have I got a whale of a story for you! I got an email last week from a gentleman who had stumbled across my website while looking up a defunct ice cream brand that used to rival Mayfield, Purity, or Baskin Robbins in terms of brand recognition. Sealtest was a nationally famous ice cream outfit in the 1950's and 60's, boasting a broad line of flavor selections and some of the cutest print ads to come out of those decades. David Wolfram, of Jacksonville, Florida, wrote in to tell us about his experiences with a 1957 contest to rename one of the flavors, of which his dad was one of the lucky winners! The pictures alone are super cool, but having the story to go with it is just a real treat.


And here's the skinny straight from the source!

"My father was one of the winners of that Sealtest Strawberry-Banana contest in 1957.

He submitted a number of names but never told the family about what he did.  So when two strangers knocked on the door of the house one August day my mother was skeptical about the authenticity of their claim.  I guess mom called dad at work to get things straightened out. An appointment was made and the Sealtest reps returned and shot some promo pics using dozens of empty ice cream cartons with mom and dad, me and my two sisters.  A picture and story were run in the local paper.

We received a book of 104 coupons, one for each  ½ gallon of ice cream.  Mother would get two or three half gallons at a time.  There was so much we sometimes had the neighborhood kids come over to help eat it.  Mother complained about all the weight she gained that year but I don’t remember anyone saying they were sick of eating ice cream.

Sealtest would not say which of my dad’s submissions was chosen.  None of us remember anything about the flavors we ate but we know we never saw a banana-strawberry.  When I look at the ice cream cartons in the photos I see only ordinary flavors.  Maybe this was a period when Sealtest first began to expand their product range.

So how did I get here?  For Father’s day one of my sisters came to the house to help celebrate.  We were sitting around eating ice cream and she started talking about the ice cream contest.  My oldest son googled our story and found this blog.

I still love ice cream.  Usually getting some “gourmet” mixture of Ben and Jerry’s or at a specialty shop. Something with a fruit flavor, chocolate, nuts and crunchy and gooey stuff.  The more goo the better.  Happy ice creaming! 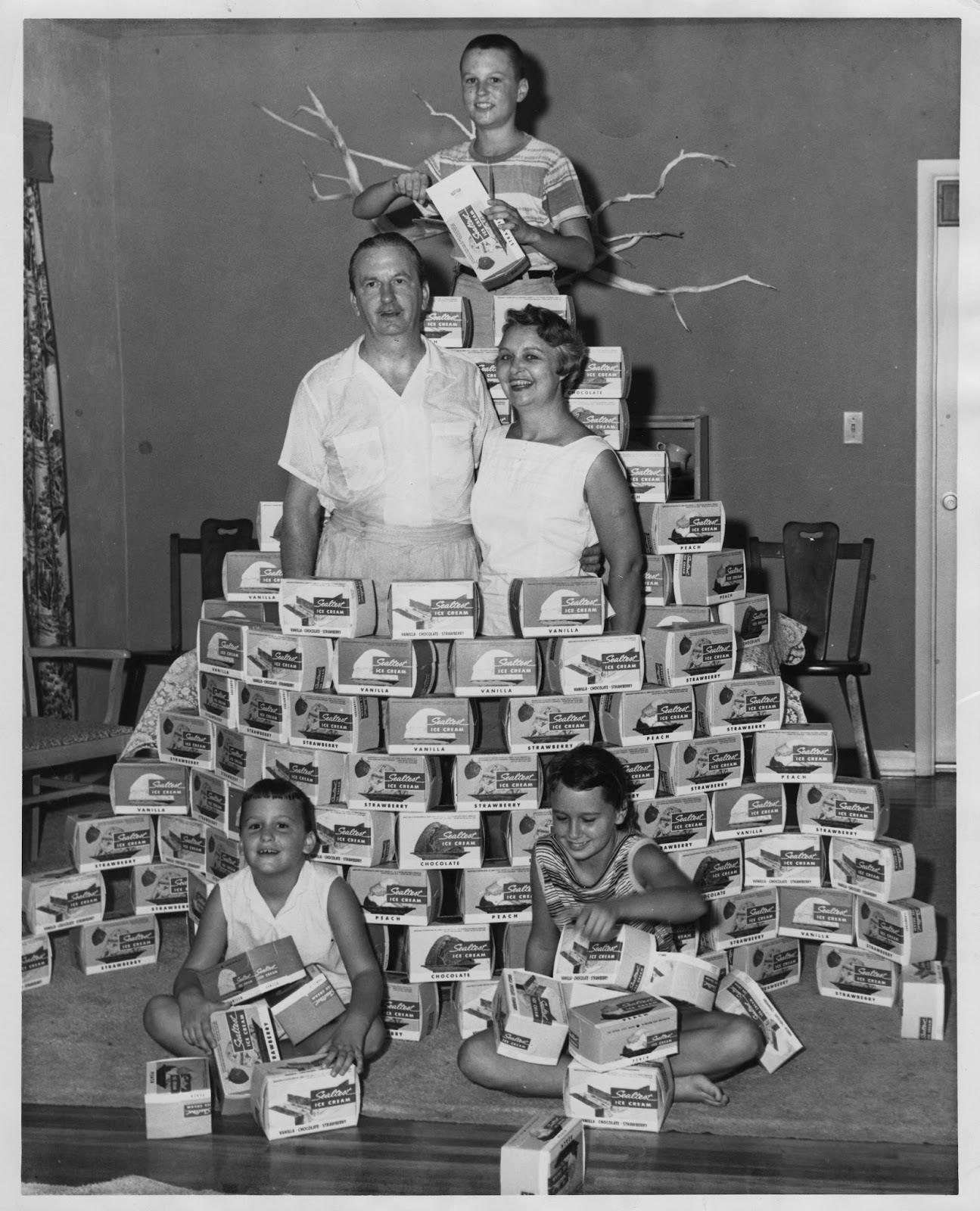 I'm glad a year's worth of ice cream didn't sour David and his family for life on the dessert, and think its fabulous he shared this story with us! Cynic that I am, I always figured the advertising people encouraged the public to write in and then just nobody ever won, but here you go-- Sealtest made good on its offer to keep the Wolframs in ice cream for an entire year! I tried to research what the name of the Banana-Strawberry concoction ended up being, but the only information I could find on a Banana flavor from Sealtest was this 1959 ad for Banana Strawberry Split: 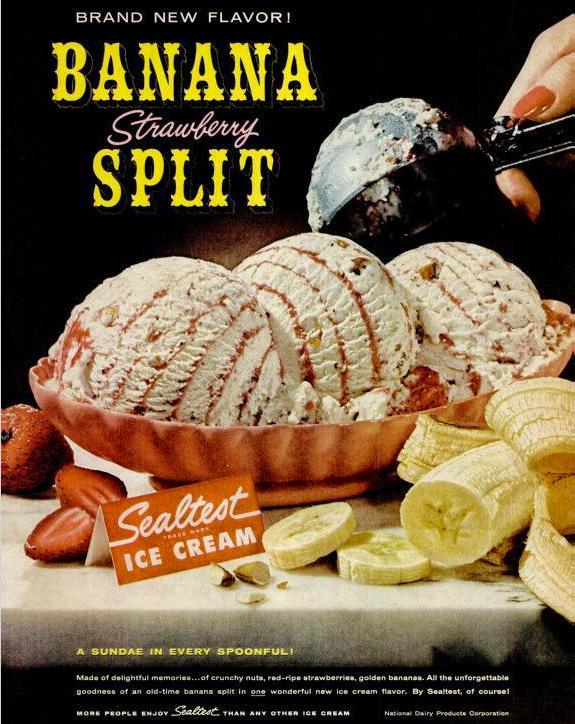 I also found this ad from the March 7th, 1957 issue of the Ocala Star-Banner while I was trying like heck to track down the original newspaper article, look how cute:

Want to know more about Sealtest? Want to eat some ice cream now? ( I'mma have to heat some SoDelicious coconut milk ice cream STAT) You're in luck on one of those yens! Here's the original post as it appeared on the blog June 20, 2012. Thanks again to David for the inside "scoop" (I crack me up).

I was doing my routine run through mid century Life magazines, a particularly cute one with by beloved Kim Novak on the cover, when these OH MY GOODNESS adorable little guys caught my eye in an ad for Sealtest Ice Cream. We got 'cher mountain-like blob of sherbet, check! We got your pink and lime green color scheme, check! And best of all, little fifities' bunnies gallivanting arround the scene exhorting us to "Dig this crazy mixed up ice cream!" Yeah, man! YEAH! Let's take a look: 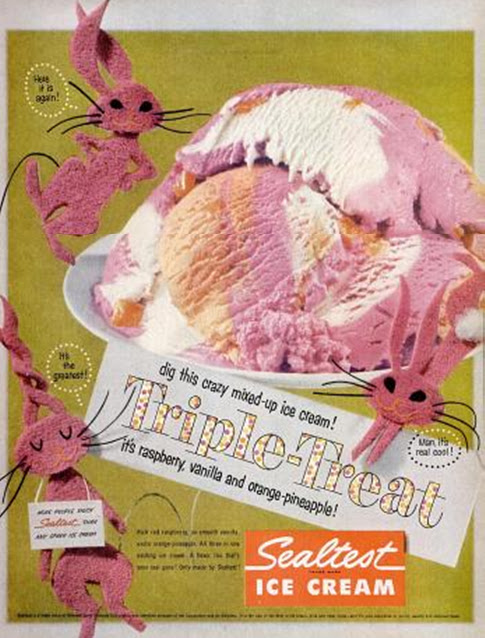 Hi, bunnies! What's that? You want me to eat raspberry/vanilla/orange-pineapple ice cream? How did you know that was my heart's fondest wish? Ice cream for breakfast? If it was good enough for Mabel Normand, it's good enough for me! I had dry toast and coffee and man am I regretting my decision. Bab, let's stock the freezer with these bad boys! The Polynesian exoticism of the flavor combination sold me even before Bunny #2 yelled "It's the greatest!" and Bunny #3 added, "Man, it's real cool!" 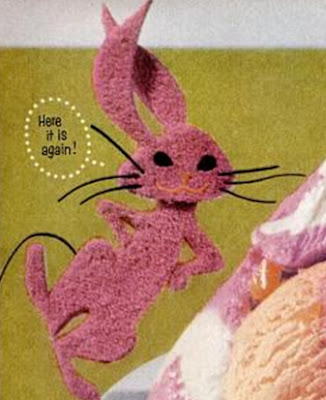 I can't lie, I was even more excited when I realized the bunnies seem to be made of strawberry-flavored cake mix. Or possibly strawberry-flavored cookie dough mix? I hope such a thing exists, because I just got R-E-A-L-L-Y hungry for some. "Here it is again!" says the rabbit, and I'm reading a little resignedness into the heel-clicking he's doing. 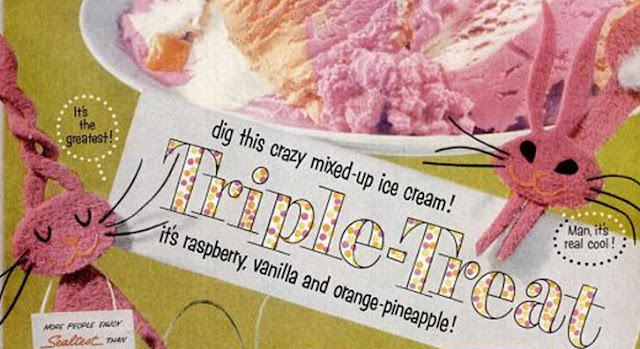 Sealtest Ice Cream's company history﻿ was surprisingly hard to look up. From what I understand, it was owned by National Dairy Products Corporation (which later became KRAFT Foods), and it was delicious. And people miss it! Unilever (who also owns Breyers') bought the rights to the company in 1993, but based on the number of Google results that include the words "demolished in" and "does anyone remember", I don't think it survived into the millennium. What a shame...seeing as I am all kinds of Sealtest ice-cream craving right now.

Like a lot of novelty fifties' food advertisements, I was interested to see how many weird (and wonderful) flavor combinations there were at one time. Vanilla fudge royale, butter almond, cherry vanilla...check out this graphic for "sunkissed peach"!


In spite of the sun-on-peach lip lock, I love that most of the ads in the fifties' are bright, colorful bids at grabbing children's attention. Because, really, as much as we love ice cream as adults, do you remember what it was like to love ice cream as kid? Before you quite understood what calories were? Here are some buttons from a 1956 Sealtest-sponsored TV show "Big Top" advertisement. The copy invites you to head for the Sealtest "Cone-vention" at the Sealtest fountain. So I think there were soda fountains that were exclusively Sealtest-stocked? There was one at Disney World in the sixties', but that's as far as I could get with that one, too. My Google research skills are really failing me today.


In 1957, Sealtest held a contest in which one lucky winner would end up with a year's supply of ice cream (can you even imagine!) for re-naming the accurately yet awkwardly named "Banana-Strawberry" combination. I'm not a fan of banana practically at all (except maybe in oatmeal or by itself), but I was intrigued by their little mascot at the bottom left hand corner: 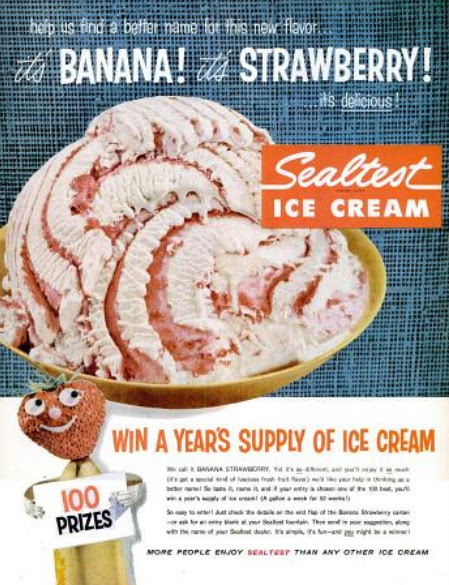 Banana Strawberry man! You remind me so much of Art Clokey's style. I love you. I hope they found a name for you, because I sure couldn't find the results of the contest online. Folks, I am batting zero. 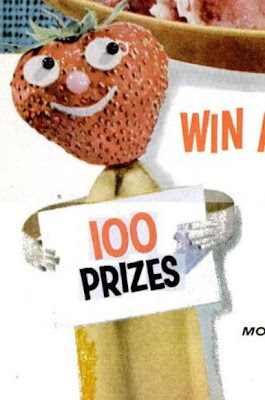 "Gay 90's Toffee Fudge" is another already-combined-ice-cream-combination I wish was still around. See the beautiful milk glass dishes these revelled little ice cream concoctions are being served in. How am I even going to make it to lunch looking at all this goodness? I love the pink gingham of the box and the little 1890's soda shop men. Why wouldn't I? 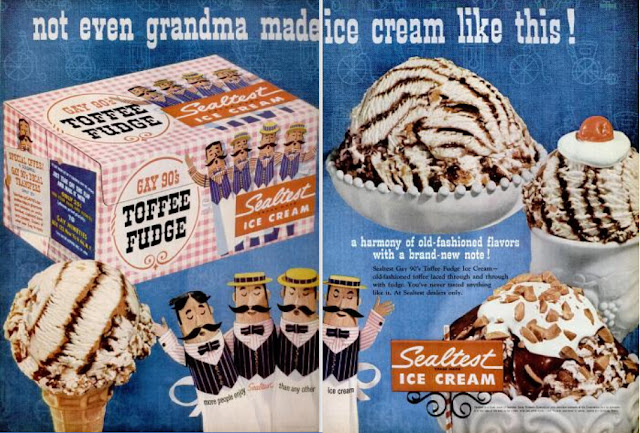 I just want a huge print of this hanging over my sofa:

I like the idea of a "try-pack" in which you could give each of these ice cream flavors a shot without committing to a full carton. Not a huge fan of orange, but maybe with the pineapple? And raspberry, a thousand times raspberry! My grandaddy used to call Neapolitan ice cream "Napoleon" ice cream or, even better, would holler out the door before my grandma and I departed for Kroger's "HAZEL! GET ME SOMMA THAT THREE-WAY ICE CREAM!" I wish I'd written down half of what he used to say, he really had the most endearingly insane way of talking. I miss hearin' him. 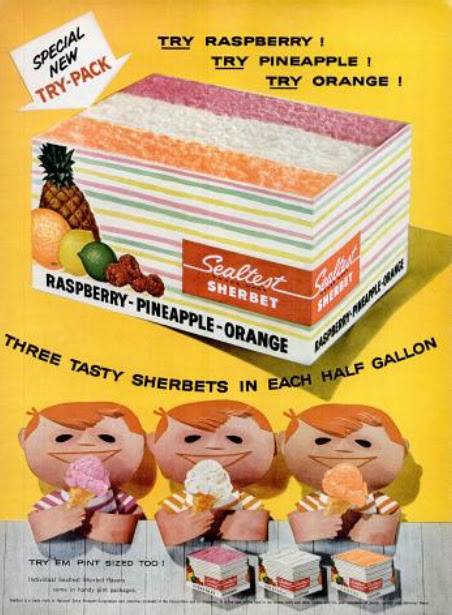 Last but not least, the craziest thing I've ever heard of: 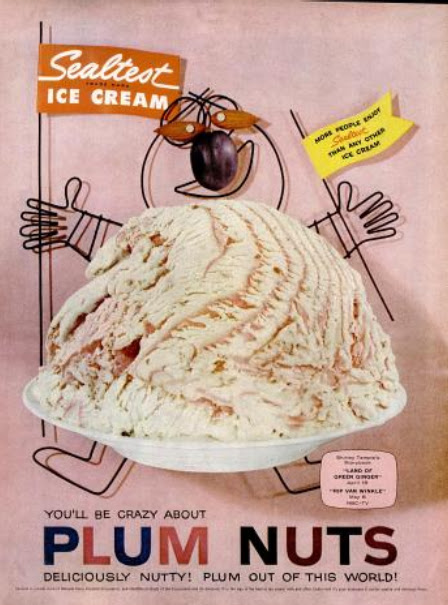 "Plum Nuts" is the flavor here. You take plums, you add nuts, and you get this completely ill-advised ice cream flavor. Has anyone ever had something like this? Because if I'm wrong, I'm wrong...but somehow I doubt it. I applaud the adorable wire figure man with almonds for eyes and plum nose, but I just can't get behind this aberration of wholesome taste.

Had any good ice cream lately? Do YOU remember Sealtest brand? Is it still around? Wanna go get some? :)

I've got to go find somewhere in the downtown area that serves ice cream ((hangs head guiltily)) . I'll see you tomorrow!
Posted by Lisa at 8:00 AM