How's every little thing? I was telling my friend Eartha the other day that I had two or three blog entries I'd started and not even attempted to finish due to a debilitating bout of inertia, but didn't just saying it outloud shame me into taking action on these poor, neglected posts? So, I thought I'd take a minute or two off from catching up on my Turner Classic Movies watchlist and handwringing over various housework projects that need attention (both of which can wait), and share with you a scintillatingly scandalous bit of salaciousness I was researching the other day. Or at least I found it so! I hope you do, too.

I was working on a little side project I've been toying with lately about vintage Hollywood scandals when a brief cotton wisp of a thought about Franchot Tone blew by while I was brainstorming incidents in the lives of ye olde classic Hollywood celebrities. Wasn't there something in his biography about a brawl over a young starlet when he was well into his middle age that put him in the hospital? Sketchy with my recollection on that (so many Hollywood Babylon type stories under the bridge), I turned to Wikipedia as an aide-memoire, which obligingly offered up the following:

In 1951, Tone's relationship with actress Barbara Payton made headlines when he suffered numerous facial injuries and fell into a coma for 18 hours following a fistfight with actor Tom Neal, a rival for Payton's attention.

Yeeeeah, that was about the long and short of it! As I tried to find Google results, I leaned on my new favorite source for contemporary accounts of historical events, which is Google Newspapers. Yea bo, can you dig up some old school dirt with the help of that search engine. But let's start at the beginning. How should you know who Franchot Tone is? Here's a little background on the fellow at the center of this 1951 media storm:
For you vintage cinephiles and fellow Hollywood gossip mongerers out there, Franchot Tone is actually at the center of Joan/Bette feud theory. If you remember your camp canon correctly, you'll know that there may have or may not have been a long going for real/not for real/possibly for publicity/but possibly not for publicity tension between two of the greatest 1930's/1940's film stars, immortalized in the first and best entry in either's mid career foray into horror, Whatever Happened to Baby Jane? (1962). Tensions during that filming ran high, but were even worse when the film was successful and a semi-sequel, Hush, Hush, Sweet Charlotte went into production. Joan dropped out a few weeks in due to "fatigue" and was replaced by Davis bosom buddy Olivia de Havilland, starting a media frenzy as to whether or not the two towering personalities had clashed as much on the set as they did on camera. However, according to The Divine Feud and a host of other separate biographies, the Crawford/Davis rancor actually dates back to 1935, when Bette Davis won an Academy Award, but not her co-star's off screen affections, in Dangerous.

Joan and Franchot divorced in 1939 but remained lifelong friends...Bette never did get her chance with her co star crush. Tone continued appearing in movies through the thirties' and forties', but as the vogue for Manhattanite roués waned, so did his star power. He's best known for, other than the Crawford and Davis movies, Mutiny On The Bounty, as third billed under the theatrical powerhouse, Charles Laughton, and MGM megastar (and former Joan paramour) Clark Gable. He married a striking blonde actress named Jean Wallace in 1941, but they divorced in 1950, leaving the still-extremely-wealth Tone single and looking-- which is when he fell for the much younger Barbara Payton.

In the movies, Franchot Tone seems to inhabit the same sort of urbane, debonair, wry and slightly patrician man-about-town character from film to film-- someone who would take you to a Park Avenue party and a rally for theater workers unions on the same night in the same tuxedo, before some inelegant mix up involving a runaway heiress or an errant Broadway producer. From the Crawford biographies, you get the sense that he was much the same person in real life...which is why hearing about him being involved in some lurid love triangle that landed him in the hospital is kind of surprising! But don't take my word for it-- I've clipped some news articles from the time and present them here in semi-chronological order so you can see just how wild both the situation and the news reporting that followed got over the course of a few months in 1951. 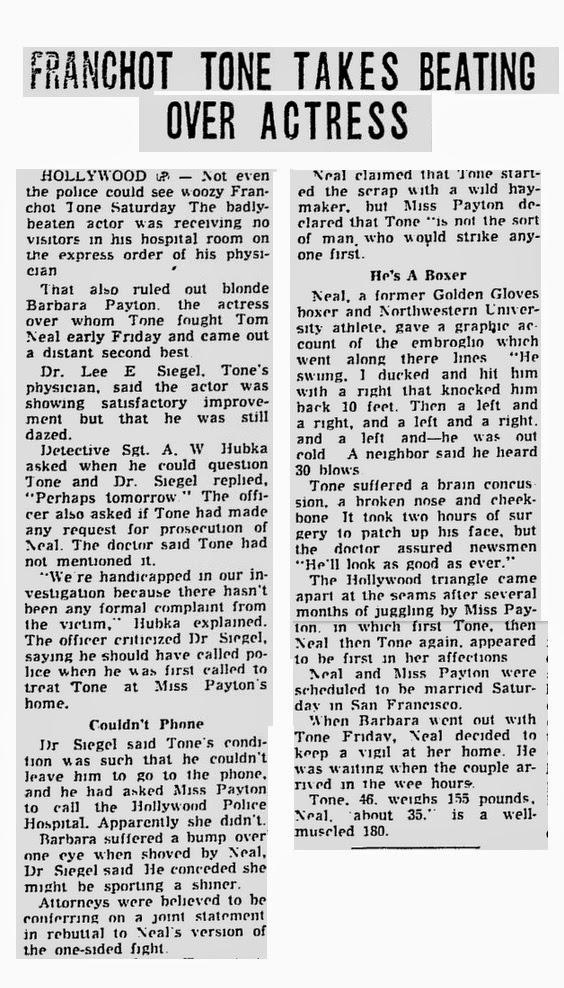 I love....and I mean I LOVE...how much like a present day news article on DailyMail or People magazine this sounds. Before TMZ or even Entertainment Tonight, you could flip to the celebrity section of your local newspaper (this one, for example, is a syndicated column appearing in the Sarasota Herald-Tribune) and read as much D-I-R-T dirt as you would in our modern age. Hollywood reporters kept on this story for weeks! As you can see in the article, what appears to have happened: Tone takes a swing at Tom Neal, Neal swings back but HARD, and Tone ends up in the hospital.

Barbara Payton was a new name to me-- she was model turned actress discovered in 1950 by William Cagney and chosen to appear in Kiss Tomorrow Goodbye alongside his lookalike brother, movie legend James Cagney. That role lead to other good-to-middling parts at Warner Brothers in the next year, including the love interest in the okay-ish western Only The Valiant (1951), with my boyfriend Gregory Peck:

Payton got involved with Tom Neal, an ex-boxer and B movie tough most famous for Detour (1945), around the same time as she met Franchot Tone. So what do you do, drop Mr. Great Body for Mr. Sophisticated Financial Security? Why would you, when you could just juggle either back and forth? Newspaper clipping-wise, Payton first shows up in Franchot's public life grâce à his divorce proceedings from his second wife. Please read the second column closely. Outloud, if you've got friends or coworkers around, and TELL ME the fifties' weren't about as gossip-hungry a public as we are today: "Corky". As Gordon Ramsay would say, "Wow, wowowowowow." For Payton's part, the blonde authored an almost incomprehensible memoir in 1963, piquantly titled I Am Not Ashamed, which described the dichotomy between her two lovers like so: 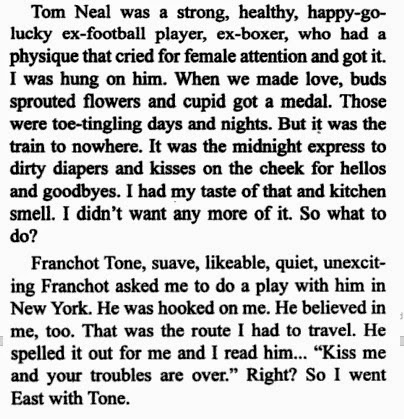 It's... pretty much as badly written as that throughout, so I'll skip ahead a little and explain that it was, according to Payton, Tone's idea to get everyone together to "talk this over in a civilized fashion", which quickly devolved into boozy quarrel, with Neal questioning the age gap between Tone and Payton, and Tone referring to Neal as an "out of work body builder". Fightin' words, son. And yet, it was Tone who threw the first punch...and probably lived to regret it I would say. 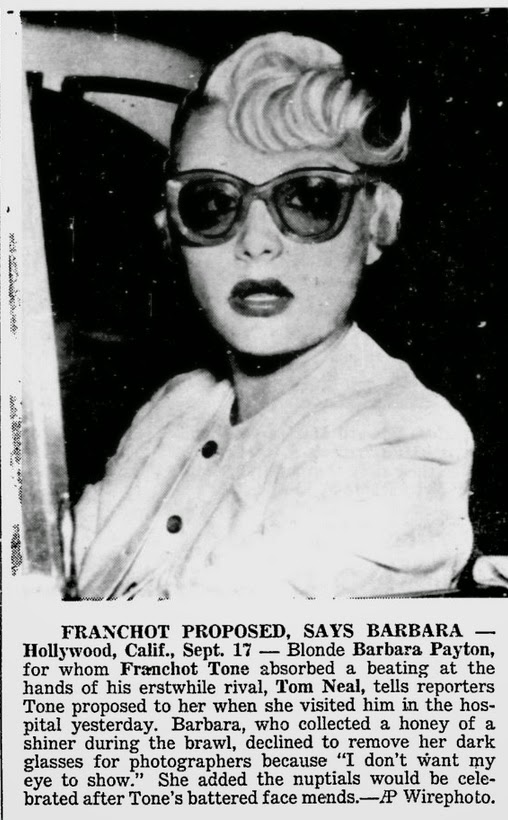 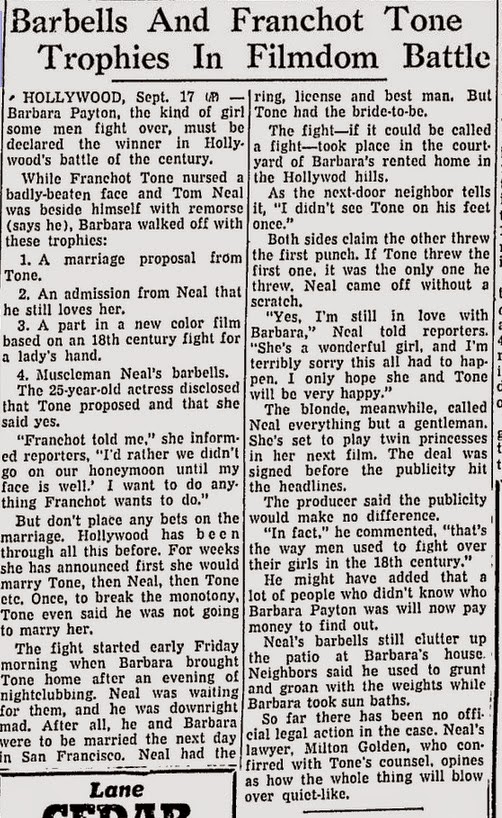 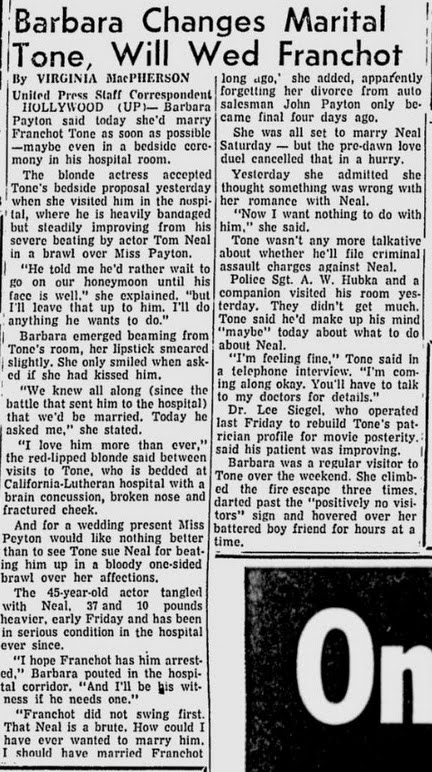 I love how Tom Neal throughout is like, "Ok. So?" when asked for comment from the media. Also, as opposed to the bland "off the wire" type sound of a lot of present day celebrity gossip reports, I think it's great how first-person a lot of these accounts sound. Like there's some newspaper man in a slouch hat running down the hallway at the hospital to use the phone. "Here, just take this down as I say it,...'Dateline, Hollywood...' " You can see in the fifties' how the iron-fist control of the studios with regard to publicity begins to break down...Warners had already spent an exorbitant amount of money on building up a celebrity profile for Barbara Payton, so it really is surprising that something like this was splashed across newspapers countrywide. If this happened in the thirties', when Tone's star was on the ascendant at MGM, guaran-TEE he would have gone "out of the country" to "rest" after this while some Swiss plastic surgeon worked his miracles on the man's mangled mug. Also, can you imagine getting in a fight with your girlfriend's boyfriend that is bad enough you end up in the hospital? Maybe I naturally spurn trouble whenever possible, but I think after my nose was broken in four places by my significant other's OTHER significant other, I would be moving on to greener, calmer pastures in the romance department. But I digress.

I think a lot of alcohol was probably also factoring into this equation, because how else can you account for headlines like this? I'm pretty sure they teach you in Northeastern blue blood charm schools that spitting in a lady's face is ne-e-e-e-ver acceptable. Did you catch that she was a witness in a murder trial as well in that second column? Again, wouldn't this make a crazy movie??

By November, things between the movie actor and the starlet had soured, and the barrage of bad press continues on into the spring of 1952, when the brief marriage began to fizzle but seriously. Read it for yourself! Sooooo much drama. 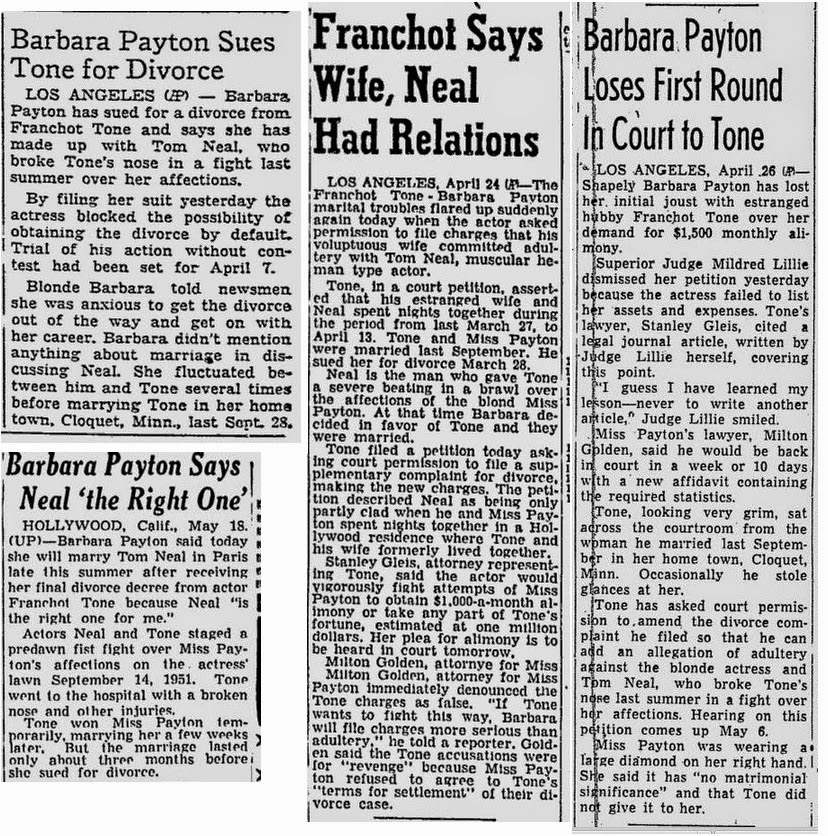 Throughout the rest of the decade, Franchot nursed his broken heart and face, working onstage and in television as he could, but never recapturing any of his clout in Hollywood. Payton and Neal continued to insist they were getting married, touring in a stage production of The Postman Always Rings Twice to capitalize on their notorious press presence, but broke up for good in 1954. Did either of them go softly into that dark night, though? An emphatic no. Once a troubled star, always a troubled star. Here's an article about Tom Neal from 1965...he was eventually convicted of manslaughter in the case of his wife's death, and served six years in prison before being released and dying of a heart attack in 1971. 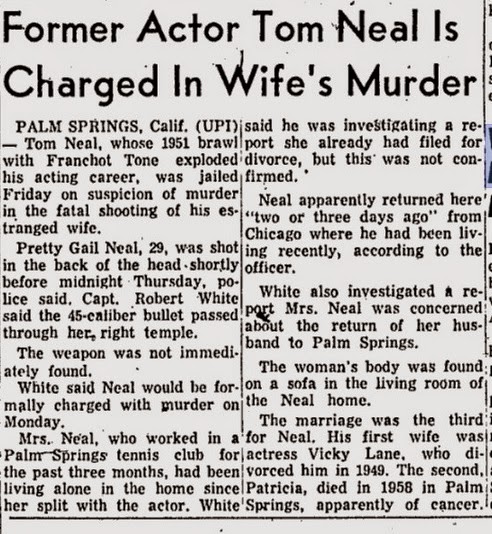 For Barbara's part, she descended into heavy alcoholism, arrested in California for passing bad checks and prostitution. She died in 1968, as, Wikipedia puts it, still holding to:


a childlike belief in her Hollywood stardom, which in her mind had never faded. She was unable to acknowledge that her once-promising career had crashed and burned, never to be resurrected.

I mean, how is this not at least an episode of Mysteries and Scandals? Right click this image for a larger version of this final clipping on Payton: 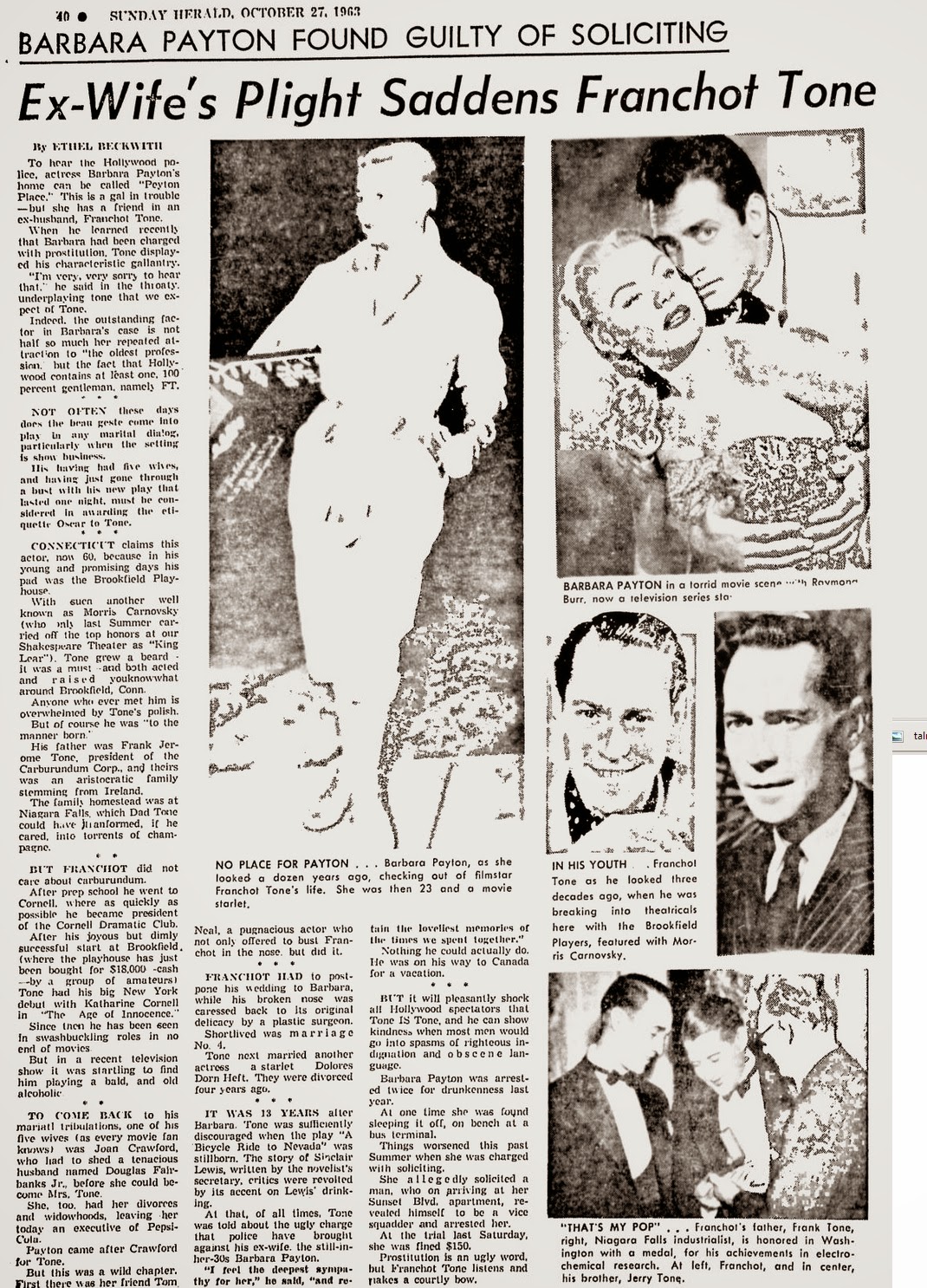 Well, I have to get going, but tell me what you think if you get a chance. Can you even BELIEVE the drama in these newspaper articles? Are you surprised at seeing early 1950's gossip described so frankly in a newspaper anyone could pick up and read? While I knew people were doing things like this in the fifties', it's pretty wild to be reading about it in contemporary accounts! Have you seen any Franchot Tone movies? Are you not shocked that he would be involved in all this? Let's discuss!!

More vintage stuff around the corner, cross my heart! I hope we get to talk again soon. Take care, til then!