Sing a song of salads... 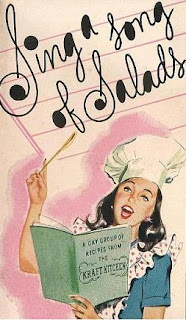 I found a treasure trove of recipes from about 1940 to 1948 in a shoebox at an estate sale a couple weekends ago. My gain, your gain.

The house, out in Forest Hills, had obviously not been lived in for years and years. Kind of like the Beales of Grey Gardens, I saw one well manicured house, two well manicured houses, and suddenly a front yard so thickly overgrown I took it for a wooded lot TWICE before I saw a mailbox peeking through a hedge.

Inside the house, much the same-- a woman who bought major appliances (stove, refrigerator) in 1940 and saved all the original invoices, tags, and brochures (also in the shoebox) seemed to have set up housekeeping there in the same decade. The fireplace was as stately as you'd see in any of the houses on the block, with an engraved basket of flowers in the middle. As for the rest of the house...well... in the ensuing half century, she must have been put in elderly care or...something. The house as seen was not fit for habitation (unlike the famous Hendersonville furniture sale, where the woman had been away for maybe five years, we're talking years and years the house must've sat vacant).

Brush and branch, so close to the house they were pushed against the glass, cast shadows over and across the front windows; one interior wall was actually falling in; each room was covered in a thick (like, Ms.Havisham thick, Vincent-Price-movie thick) layer of dust. It was creepy, but it was kind of exciting. I don't think I've ever been in a house that forgotten. If the salad days portion of Ghost Story had been set in the 1940's, the house in the 80s after years and years of neglect would have been the house in which the estate sale was held.

Sad and strange, but...a goldmine of an estate sale opportunity.

Sitting like a grail in a beam of sunlight from a broken shuttered window in the front room was a somehow UNTOUCHED 1960 portable chord organ: 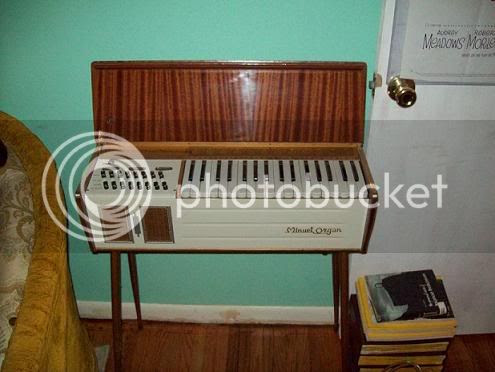 Next, a late 40's GE bakelite radio alarm clock with a red and sky blue dial (exactly like this one). Slight cracking near the back of the piece, but otherwise perfect. Two dollars. Again, not even likely.

But my best find?

Hauling the (deceptively named, it was very heavy to be a)portable chord organ outside, I stopped in the kitchen at the sight of a large shoebox FULL of papers. The photo of Kate Smith on the top caught my eye-- she was on the front of recipe book of her own breakfast receipes and serving suggestions (why anyone would take eating habit tips from Kate Smith is beyond me...singing, yes; diet, no). A dish or two from this pamphlet is used in my cooking bible, Square Meals by Jane and Michael Stern. Ding ding ding ding ding! But what else?

Inside the shoebox? EVERYTHING. This woman obsessively collected free pamphlets and recipe books from every major retailer in the 40s. Sent off to retailers for samples of things like linoleum and wax paper and decorative napkins. Peeled off labels and cut out the backs of boxes, picked up cooking leaflets at grocery stores ( both A&P AND Kroger) and sent away for booklets, for the whole of the 1940's. It's like having a solid BOX of what the Sterns must have used as sources for their vintage cook book compendium. If Square Meals is orange juice, this box would be the concentrate. Almost too much to look at.


This one is the first of several of my favorites. Why? Say the title outloud. Also, the expression on the girl's face is adorable. Also, when's the last time you made a top notch congealed salad? Or for that matter, anyone in our age group EVER did?

Where websites like lileks, despite being excruciatingly funny, might look at some of these dishes and get yucked out at first sight, I think food nine times out of ten just looks weird being photographed or drawn. Food should smell good and be eaten. Done. As far as looking good... I like to give things the benefit of the doubt. Especially when it comes to vintage fixin's.

I haven't tried cooking any of the below yet, but I will. More recipes to come, scanner willing. But for now...

Ready to sing a song of salad? Click on the thumbnails to find out how.